San Mateo is a first class municipality with a population of over 250,000 people as of 2015. It is bordered by Quezon City on the west end, Rodriguez, Rizal on the northern end and the cities of Marikina and Antipolo to the south. It is considered as one of the fastest growing municipalities in the province of Rizal.

Among the predominant industries in San Mateo are welding shops and motor pools. Most of the industries here are considered small to medium enterprises as well as agri-businesses including poultries and piggeries. There are also many factories located in this municipality including those for slippers, shoes, and a warehouse for a known soft drinks brand.

The central business district in San Mateo is bordered by the public market and the national road. Here, residents will find restaurants, banking institutions and other retail outlets. Bank branches include Banco de Oro, Bank of the Philippine Islands, Philippines Savings Bank, EastWest Bank, United Coconut Planters Bank and a couple of other local and thrift banks.

Residents of Mandala 2 will find that while the area feels like a haven away from the city, they aren’t really away from the comforts of a cosmopolitan lifestyle.

For starters, those with school-age kids can choose from a long list of public and private academic institutions from primary school to college.

For those in the tertiary level, colleges within San Mateo include St. Matthew College and the San Mateo Municipal College. Of course, parents can also opt to send their kids to the country’s top universities in Quezon City including University of the Philippines in Diliman and Ateneo de Manila University in Katipunan.

Mandala 2 is also near hospitals such as Shepherd Rehabilitation and Super Health Center. For shopping and retail services, nearby lifestyle centers include SM San Mateo, G MART, Princess Store and Ellaine Store.

For churches and places of worship, San Mateo is home to Nuestra Señora de Aranzazu, United Church of Christ in the Philippines, Immaculate Heart of Mary Chapel, Marvi Hills Chapel and Amazing Grace Mission Church, among others.

In terms of transportation, private car transport is the most efficient way but even for those who commute, there are various ways to go around San Mateo. Public utility jeepneys, buses, tricycles, pedicabs and GT/UV Express Vans operate around the municipality.

To go to Mandala 2, go northeast via Commonwealth Avenue, turn right before Sandigan Bayan, going to Batasan Road. From here, turn right again to Batasan-San Mateo Road. Cross te bridge over Marikina River and make a left at General Luna Avenue. From here, you will pass Tropical Hut and Mercury Drug. Make a right at De Los Santos Street. You will find a slope and this is your sign to turn left going to Timberland Heights.

Residents of Mandala 2 are not confined to living within San Mateo. This strategically planned development is easily accessible to and from financial, educational and business institutions. 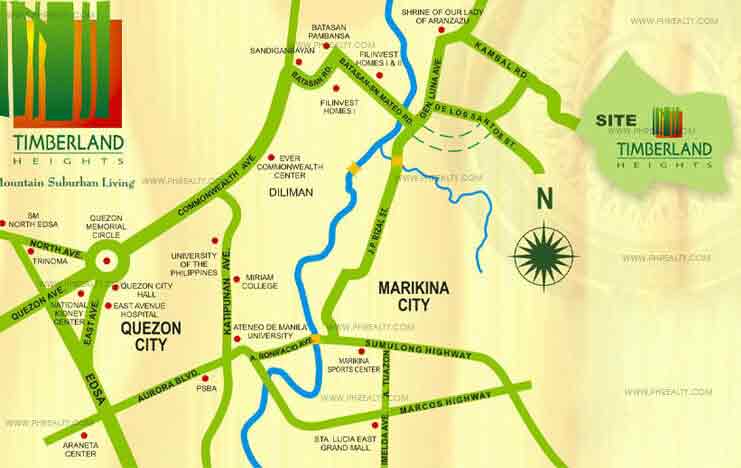